It was sad when the great ship went down 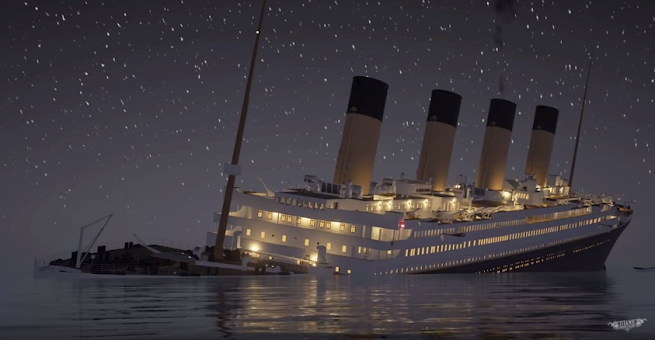 One of the many good things about taking some time off, as I did last week, was in catching up with items that one needs time to appreciate. Such is the case with this extraordinary video that has been making the rounds, showing the sinking of the Titanic in real time.

Now, having had a longtime interest in the Titanic, this was something I couldn't resist. However, it called for watching at one sitting to really appreciate its full power, which is why I held on to it until last week, a few days following the 104th anniversary of the sinking. It truly is an amazing video, not just for the subtle signs over the two hours and forty minutes of the ship sinking deeper and deeper into the water, but for the eerie look of the ship absent any people (a decision by the software designers; this is, I think, an alpha version of the final product), particularly in the last minutes when all the lifeboats are gone, their empty davits - which were never intended to be used - standing in mute testimony to the ongoing horror. It is, and I don't mean to overuse the word, an extraordinary experience.