The pseudosport of professional wrestling reflects on absurdities 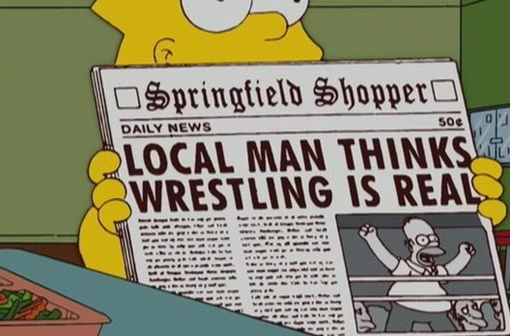 The fixed pseudosport of “professional wrestling” is now starting to run amok in regards to a pair of incidents on the news this week, in puns that those who watched “Championship Wrestling” could understand.

Exhibit A is the New York Daily News cover that denounced Ted Cruz, who had previously referenced “New York (City) Values” in regards to various issues, including his opponent in the Republican Primary.  This tabloid style newspaper (note how it resembles a tabloid and not a regular newspaper) has made numerous cover references that attack the rest of the nation.  The cover of the said publication on the morning of this post being written has a double-entendre that also cites “championship wrestling” in its veiled attack on Mr. Cruz.  All I could see from this through the eyes of the popular pseudosport was Ted Cruz responding with an Attitude Adjustment on the publication in light of them trying to deliver the same move on him.

Exhibit B is the California Attorney General Kamala Harris, who has now worked to arrest the filmmakers investigating Planned Parenthood selling baby parts.  She is running for the US Senate seat in the state, no less, and associated with Planned Parenthood, so she is working to arrest her opponents for uncovering the scandal of Planned Parenthood selling freshly slaughtered children for cash.  Don't forget also that she refused to defend the state's Constitution when it regards to legal unions of one male and one female only as Attorney General, choosing after being sued to jump to the camp of the sexual perversion camp to create an automatic squash of the laws she was to defend, a tactic now used by many state attorneys general when the erotic liberty crowd wishes to overturn laws based on their feelings based in Biblical standards and passed by supermajorities of over 60 percent nationlly, over 75 percent in man states.  This has the look and feel of a monster heel, as her name is reminiscent of a Mississippi “professional wrestler” of the 1980's who was a monster heel.  Freedom of speech isn't available if you are not in the Left's protected territories, no less, and the only freedom they desire is sexual freedom, so it's time to shut opponents.  What does it say?

In both cases, I see cases of “championship wrestling” coming.  In the former, I see the “Attitude Adjustment” reference, and in the latter, I see a “Ugandan giant” reference.  Has the pseudosport come to full fruition in these recent stories?
Email ThisBlogThis!Share to TwitterShare to FacebookShare to Pinterest
Labels: Morality, Politics, Wrestling