A unique way to get ejected from a match... 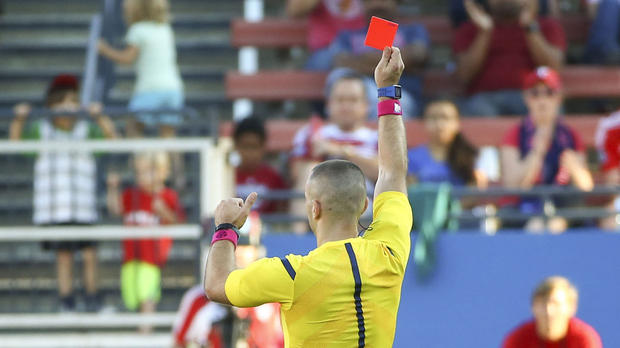 This, I kid you not, is not from The Onion, although it reads like it. (I would have been very proud to have written this for one of our "This Just In" pieces.) From The Guardian:

A Swedish footballer has hit out after being sent off for breaking wind during a match – with the referee accusing him of “deliberate provocation” and “unsportsmanlike behaviour”.

Adam Lindin Ljungkvist, who was playing at left-back in the match between Järna SK’s reserve team and Pershagen SK, was shown a second yellow card late on in what local media called “bizarre circumstances”.

“I had a bad stomach, so I simply let go,” the 25-year-old told Länstidningen Södertälje. “Then I received two yellow cards and then red. Yes, I was shocked, it’s the strangest thing I have ever experienced in football.

“I asked the referee, ‘What, am I not allowed to break wind a little?’ ‘No,’ he replied … I don’t get it but maybe he thought I farted in my hand and threw the fart at him. But I did not.”

Opposition striker Kristoffer Linde told the paper: “I was standing a good distance away but I heard the fart loud and clear. It’s the strangest thing I’ve seen on a pitch, and I’ve been playing football since I was eight years old.”

The referee, Dany Kako, confirmed that Ljungkvist had received the second yellow card for breaking wind, explaining: “I perceived it as deliberate provocation. He did it on purpose and it was inappropriate. Therefore, he received a yellow card.”

Ljungkvist told Aftonbladet: “To provoke anyone with a fart is not particularly smart or normal. It’s nonsense – I just broke wind and got a red card. I spoke to the referee afterwards, I was annoyed, but there were no bad words. I just said he was a buffoon.”

Kako said he had experienced similar incidents before. “Once there was a player who stood and peed next to the pitch. I showed him a yellow card, too.”


This is a good example of why satire gets harder to do every day - I mean, if you can't count on this being a spoof, what can you depend on anymore?
Email ThisBlogThis!Share to TwitterShare to FacebookShare to Pinterest
Labels: Humor, Sports