The pope's poverty of thought 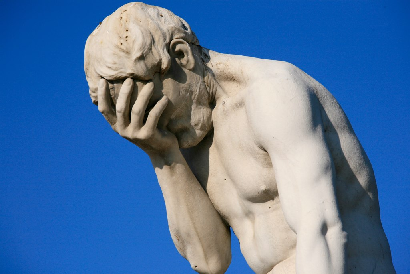 A while back, returning from his papal trip to Mexico, Pope Francis took the opportunity to revisit his vision of the Church as a “Church of the poor.” Among other things, he declared that “poverty is the great teaching” of Jesus, and finished by saying, “How I wish that Christians could kneel in veneration when a poor person enters the church.” Setting aside for a moment the fact that Christians venerate no man save God, the pontiff’s words seem to me, for all the world, like a return to the quaint romantic notion of the “noble savage,” the primitive who achieves a kind of sanctity by virtue of his lack of contact with the outside world.

And if that is what he actually believes, then I think we have a problem.

I'm bothered by this automatic linking of poverty and piety. For all the injunctions which Christ made about taking care of the poor, he never promised that poverty alone would see someone into heaven. Likewise, does the pontiff really mean to suggest that any opportunity to improve oneself, to emerge from poverty and possibly become successful in business (thereby affording the opportunity to help others out of poverty) should be eschewed in favor of remaining poor? As Steve Moore, wrote in Forbes last year: “What is the theological case for telling those in the poorest villages of the planet where people still live at subsistence levels, that they have a moral obligation to save the planet by staying poor and using less fossil fuels, less energy and electricity?" Like Moore, I fail to see the connection.

When he used such glowing terms to speak of the poor, Francis said nothing new. One can go back centuries to the times of Peter Martyr, who wrote of those noble savages that “They seem to live in that golden world of which old writers speak so much, wherein men lived simply and innocently, without enforcement of laws, without quarreling, judges, or libels, content only to satisfy nature.” Montaigne, fueling the fires of such romantic rhetoric, proclaimed more than a half century later that “In my opinion, what we actually see in these nations not only surpasses all the pictures which the poets have drawn of the Golden Age, and all their inventions representing the then happy state of mankind, but also the conception and desire of philosophy itself.”

And yet we know that is wasn’t case, in Martyr’s time any more than it is our own, that the poor were living saints simply because of their poverty. The very Spanish who ran across the New World, upon discovering cannibals in the Caribbean, came to view these “noble savages” as “devils in the form of men” and, shocked, found it necessary to forcibly convert them. While there may be a certain spiritual strength to living without, particularly when doing so by choice rather than circumstance*, the vast majority of poor people see poverty as a burden to overcome, a state in life above which one should rise.

*It’s true, however, that “When life gives you lemons, make lemonade.” When poverty finds you, rather than the other way around, it can and does serve to focus the mind, often to great holy effect.

By elevating poverty to a kind of religious vocation, the pope threatens to deny the existence of Original Sin – in other words, he creates out of poverty a second Garden of Eden, linking not just prosperity but financial security itself with a type of corruption of the human soul. Keep in mind, however, that if evil arose out of the Garden of Eden, good likewise emerged, as Milton notes in the Areopagitica, saying “It was out of the rind of one apple tasted that good and evil leapt forth into the world, like two twins cleaving together.” Keep in mind, as one linguist pointed out, that Milton was fond of puns and wordplay, and that the word taste itself is a reference to the Latin word “Sapere,” which means both “to taste” and “to know.” Are we, therefore, to posit from this that the two words, taste and know, are fatefully intertwined, that the knowledge brought forth from the forbidden apple consisted of both good and evil?

Of course we know that Latin is not the pope’s strong suit; nevertheless to carry out this analogy to its logical conclusion – though I stress that this is merely one logical conclusion, not a definitive one – we have to view the poor, the residents of this second Garden, not as good untainted by evil, but as ciphers, neither good nor evil but blank canvases upon which both will be imprinted, as soon as knowledge of the world is experienced. Is this really the analogy which the pope wishes to create?

Perhaps it is. In lionizing the poor, the pope takes his cue from Rafael Tello, a fellow Argentine, one of the founders of “a theology of the people,” who in looking at their lives wrote of their culture as one which “is celebrated as a popular form of permanent resistance against the oppressive forces of modern development.”  When the pope declares that “poverty is the great teaching” of Jesus, he of necessity places them back in the Garden; as Catholic writer Maureen Mullarkey writes, “In this euphoric apparition, the pueblo—the indigenous poor—are a primal entity. Poverty retains a hint of Eden, and the poor are themselves agents of redemption for the developed world.”

The implications of this are manifest. Writes Mullarkey,

Bergoglio has internalized Tello’s ecstatic vision of the poor as the collective completion of the Passion of Christ. They are co-operators of salvation (Albado: “cooperadores de la salvación”) and, hence, a gift from God. Christianity provides a scaffold for sacralizing a mestizo variant of the Marxist proletariat. Theology of the people blends class struggle and mysticism in the time-honored language of gospel concern for the poor.


Mullarkey shrewdly sees problems with this. “What is new in this mystique of the pueblo is its other-worldly intoxication with poverty, as if material deprivation conferred holiness.” [Emphasis mine] Not only are the poor burdened with having to redeem the fallen world, “[they] are revered insofar as they play the role of the People, actors in a paternalistic drama directed by marxisant superiors inclined to interpret affluence as a signal of moral defect.”

I like the phrase that she uses, the idea that “material deprivation conferred holiness.” No, it does not. Faith and the acting out of faith through living a spiritual life, performing the corporal and spiritual works of mercy, as well as willingly uniting one’s life and suffering to that of Christ, confers holiness. To equate holiness with poverty, especially when that poverty is something into which they’re borne, gives them a status based on something over which they have no control. You might even think of it as some kind of “unearned privilege” since they did nothing to achieve it, other than continue to remain poor. Kind of ironic, isn’t it?

I mentioned earlier this tricky bit about venerating people. This idea of playing favorites, as it were, is not just distasteful, it really runs contrary to God’s own character. The Old Testament provides an abundance of evidence to the contrary, particularly when it concerns the poor. Leviticus 19:15 teaches, “Do not pervert justice; do not show partiality to the poor or favoritism to the great, but judge your neighbor fairly.” Exodus 23:3 likewise commands, “Do not show favoritism to a poor man in his lawsuit.” In other words, justice should be blind, and both rich and poor should be treated equally before the law.

James says in 2:4 warns, “Aren’t you discriminating against people and using a corrupt standard to make judgments?” While his warning applies specifically to favoring the rich over the poor (and is often stressed by today’s socially relevant Church), the opposite must be true as well, for Paul tells the Romans in 2:11 that “God does not show favoritism,” and again in Ephesians 6:9 says that “There is no favoritism with him.” Finally, Colossians 3:25 teaches God’s fairness in judgment: “Anyone who does wrong will be repaid for his wrong, and there is no favoritism.”

What are we to take from all this? While James in 2:5 continues, “Has not God chosen the poor in the world to be rich in faith and to be heirs of the kingdom that he has promised to those who love him?” this is, as one commentary points out, “likely an allusion to Jesus’ words in the Sermon on the Mount or Plain (Matt. 5:3; Luke 6:20). The poor are not inheriting the kingdom because they are better people than the rich, but because they put their trust in God. [Emphasis mine] Lacking the means to depend on themselves, or to curry favor with the rich, they have learned to depend on God.” And that’s it in a nutshell: what makes the poor the favored of God is not their poverty in and of itself, but their subsequent choice to put their trust not in the material goods of the world, but in God.

While the fruit of the Tree of Knowledge, containing both good and evil, stained man irrevocably, but God did not fail to provide a solace. It is in the province of man, through free will, to use that knowledge, ill-gotten though it may have been, for the greater glory of God, by cooperation with Him in His grand design. From this divine partnership (if one can call it that) many great things have emerged. Someone, I don’t remember who, wrote once that we do not help the poor out of our own volition, but because Christ commands us to do it. James, in particular, demonstrates that good works are made possible by faith in Christ. It was part of His mission; therefore, it is part of ours as well. And it is that, as imitators of Christ – not by the mere fact of being born into the indigenous poor – which leads us to holiness and salvation.

Whittaker Chambers points out in his devastating review of Ayn Rand’s Atlas Shrugged that “if Man’s heroism (some will prefer to say: human dignity) no longer derives from God, or is not a function of that godless integrity which was a root of Nietzsche’s anguish, then Man becomes merely the most consuming of animals, with glut as the condition of his happiness and its replenishment his foremost activity.” If capitalism lacks a moral foundation, it becomes just another –ism. And so it is with the poor as well. True poverty does not qualify one as a saint, although it may well make one a saint. Likewise, true wealth cannot be measured with the Sign of the Dollar, but the Sign of the Cross.

Is it too much to draw from all this that wealth and poverty are themselves merely measuring devices of the world, and that the total draining of self to God – in other words, the self-induced poverty of everything save God – is what leads to salvation? If so, then Pope Francis ought perhaps to examine his thoughts more carefully. Remember, God judges all equally – does that not extend to the thoughts of popes as well?
Email ThisBlogThis!Share to TwitterShare to FacebookShare to Pinterest
Labels: Economics, Pope Francis, Religion