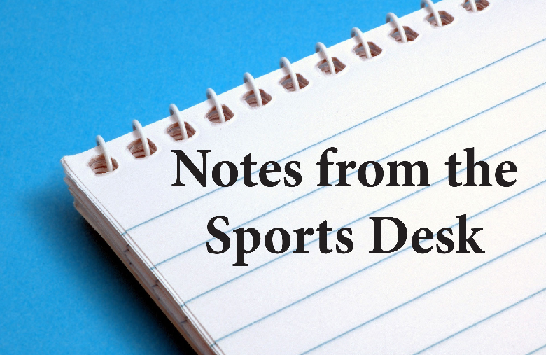 A little of this and that:

Five Days!  The American Hockey League Calder Cup, the oldest continuously awarded annual trophy in professional hockey (since 1937; the NHL Stanley Cup has only been annually given since 2006 - due to the lockout - while the ECHL championship has been annual since 1989, and the current Kelly Cup trophy since 1997), has an odd five-day break between Games 3 and 4 because of the NBA Finals logistics.  Even though the two teams (Hershey and Lake Erie) had been determined for a few days, the AHL could not announce the schedule until the NBA Western Conference Finals ended because Lake Erie plays at the Quicken Loans Arena.  The NBA has priority at the Cleveland arena, and the AHL had to wait until it was determined if the NBA Cavaliers had Games 1 and 2 or Games 3 and 4 to determine when the Hershey-Lake Erie series could be played.  As a result, the AHL series plays Monday, June 6, and will have to wait until both Games 3 and 4 in the NBA Finals are concluded before resuming Saturday, June 11 and playing the next day with no break, before the teams travel immediately to Hershey if necessary.

Clinton Yes, Trump No in Golf?  The PGA TOUR is planning to move the WGC Championship (formerly the Doral Open) out of Miami's Doral National, currently owned by The Trump Organisation, to Mexico City.  Now that sounds suspicious considering the Steinle incident and Mr. Trump's warning to illegals in Mexico traveling north in light of that San Francisco incident that we now understand was the game changer that gave him the Republican nomination.  Meanwhile, the TOUR has not said anything about the Clinton Foundation's name or support of the Desert Classic, known as the CareerBuilder Challenge benefiting the Clinton Foundation, formerly the Bob Hope Classic.  (Since the Clinton Foundation takeover, the event lost its uniqueness of being a five-round tournament; it plays a standard 72-hole format.)  Why is Clinton permitted by not Trump?

A Long Time Ago, in a Galaxy Far, Far Away.  Or so it seemed, when a judge who is a fan of opera punished a man who turned his car into a gigantic boom box by making him listen to an entire opera. Now it seems another judge has taken inspiration from this in light of actions that took place after an ECHL game between Cincinnati and Fort Wayne!  Who says judges can't teach discipline?

The West Coast Control.  If it is not clear the West Coast is now in clear control nationally, note the NBA Finals have games starting past 9 PM ET.  These 9 PM ET games effectively ensure that the games will get too close to midnight on the East Coast.  For a sports league where the dominant two states of the past 20 years are Texas and California, that is not a problem.  But much of the nation will get too close -- despite MLB having complaints of World Series games going past 11 PM, why does the NBA not have the same problem with games going past 11:30 PM ET, past the late local news?
Email ThisBlogThis!Share to TwitterShare to FacebookShare to Pinterest
Labels: Opera, Politics, Sports, Television