Excessive control by the fringe left 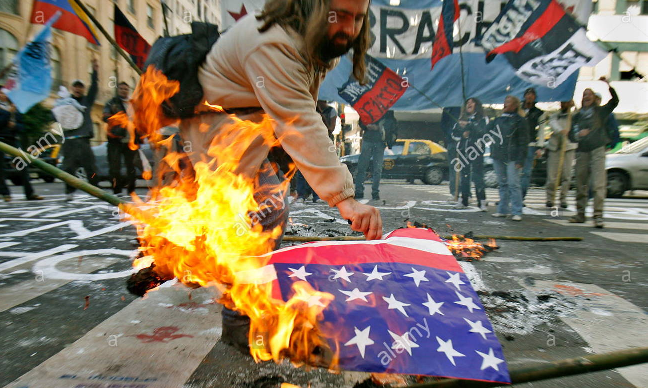 Fringe organisations pushing extremists views have become rampant, and in the outgoing Administration have become the ones in charge.

We have seen it with the fringe sexual organisations, first with a “thought crimes” law (PL 111-84), then converting the military to social engineering for sexual perversion (PL 111-321), then an executive order written to target Exxon Mobil shareholders after 15 consecutive wins over New York City's retirement system demanding the company install SOGI policies (sexual orientation and gender identity;  I voted against the said policies when it came to a vote each year), and the signature of this Administration, erasing marriage laws because they they believe those with a Biblical worldview must be erased by having the erotic liberty agenda forced down through packed courts after they lose at the ballot box and the legislature;  Obergefell was a federal Reynolds case where the large liberal urban centres gained absolute control of legislation via court order (in Reynolds, states were given to the largest cities, which creates crises in those states controlled by a few cities as Chicago, MSP, New York City, LA/SF, et al, are examples), and the entire nation is not allowed to have a say on issues based on false pretenses that these crybabies out of touch with the supermajority are given superior rights to others.  They have also legalised certain varieties of child abuse (child not having a father and a mother, but two fathers or two mothers), and have gained effective control of the nation by force using the courts.

We have seen it with the race baiters and the BLM lobby, also known as the “NWA Foxtrot the Police” lobby for the song that is their effective mantra (an extremely racist and obscene song), intentionally weakening the police force with riots based on their own feelings that they should not be responsible for .  They believe in a “West Coast Offense” feel for police.  They can force the police to be defenceless while they have rights to take down our bravest, as we see in their attitudes blocking roads when they do not have it their way.  The consequences of such anti-police attitudes have resulted in more police deaths and shootings, and an increasing hatred of police.  Why this attitude?

From race and sex baiting, now we have seen it with Feld Entertainment's announcement that they will shut down the Ringling circuses they have owned for nearly 50 years.  The Feld organisation claims the fringe animal rights groups helped cause the decline in ticket sales.  That forces me to ask the same question as I have noted earlier here – why have radical fringe groups gained control of the country.  They seized our Constitutions, they seized our police, they seized our industry, and now they are shutting down family entertainment and animal shows.  These animal rights activists will target the rodeo and PBR next, then polo, equestrian, and horse racing.  Do they understand the history of animals in competition?  Do they even want people to appreciate animals and their abilities?  They will call anything with animals abuse if it does not fit within their own worldview of not allowing them to sit in the sun and be friends with humans.  They want a primitive view of animals and probably would have wanted to ban domestication of cats.  These fringe activists do not want children to appreciate animals where they can be seen locally and not travel 10,000km to see them attacking other animals.  Meanwhile, Feld will market sensually dressed leather-clad women holding 30-second boards at motorcycle events.

Does this demise of the circus show a worldview where every fringe group – sexual perversion, fringe anti-Trump people, animal rights, Hollywood, and the rest – have rights to overrule the majority?

Oh, by the way.  The media needs to get a grip with President Obama's final days commuting Bradley Manning's sentence.  He was a traitor to the country, and he is being rewarded primarily because of his "Golddust" gimmick.  If he wants to claim to be Chelsea, wear the blue Yokohama Tyres kit and be a supporter of a Premier League club. Bradley, you are a man and you have the X and Y chromosomes.  Quit with Dustin Rhodes' gimmick.  Even Dustin's brother Cody hates a similar gimmick given to him and left WWE for that very reason.
Email ThisBlogThis!Share to TwitterShare to FacebookShare to Pinterest
Labels: Liberals, Politics