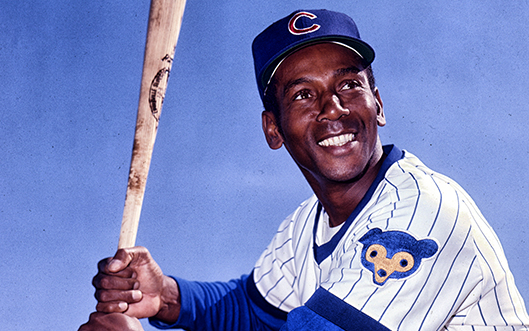 If ever there was a player who exemplified the joy of baseball, the delight in playing what is essentially a kids' game, it was Ernie Banks. No celebration of baseball could be complete without a tip of the cap to the man whose entire career was a celebration. Would that he would have been able to see the Cubs win the Series last year.

E rnie Banks, the Chicago Cubs baseball star, was buried today in Chicago. His performance on the field was spectacular—19 seasons, an 11-time All-Star, the first National Leaguer to win back-to-back Most Valuable Player trophies, a total of 512 home runs, Hall of Fame first ballot in 1977. His character off the field was even more exemplary—a spirit of joy, optimism and enthusiasm that was contagious way beyond the friendly confines of Wrigley Field.

Yes, Ernie Banks certainly was, for all the right reasons, Mr. Cub.

There were times, many probably, when that spirit was tested. Banks was the first African-American player on the Cubs when he joined them in 1953. Even as tributes flowed at the news of his passing last week at age 83 from a heart attack, references were also made to early ‘50s encounters that hadn’t been so welcoming. “People said terrible, racist things to him,” one long-time Cub fan recalled. “But Ernie just smiled right through it.”

And then there was the losing. The Cubs have become the longest-running “lovable losers” in major league baseball, if not in all of pro sports. They haven’t been in a World Series since 1945. They haven’t won one since 1908. In Ernie’s first 14 years as a Cub, they only had one winning season. Ernie played 2,528 major league games. None were in the post-season. (That futility is summed up in a riddle. “What did Jesus say to the Chicago Cubs?” Answer: “Don’t do anything until I get back.”)

Losing didn’t dampen Ernie’s spirit, though. “Let’s play two!” became his well-quoted catchphrase. He loved playing the game, it was all about the game, win, lose, whatever. It was the friendly, positive spirit of competition that he most enjoyed. That spirit infused Cub fans, it seems. It lingers at Wrigley, and perhaps in a few other, sadly vanishing, ball fields today.

I wasn’t a natural Ernie Banks fan. Growing up near San Francisco, I was a Willie Mays guy. I resented anyone crowding Willie’s spotlight. (With some justification. In 1958, when Banks became the first player on a losing team to win an MVP, he hit .313. Willie hit .347 that year. Just saying). But I always respected Ernie Banks and enjoyed watching Cubs games on TV, amazed at this slim shortstop who could pretty much do it all.

I realized in a new way this week how much I admired, and will miss, Ernie Banks. It took a Super Bowl to do it.

First it was the sports media machine pumping out endless, rancorous stories about possible cheating in the NFL, in what’s being called “DeflateGate.” Then it was the Super Bowl media day circus where one player in particular—Seattle’s Marshawn Lynch—became the poster-child for today’s arrogant, self-obsessed, pampered, obscenely overpaid, and repugnant professional athletes by ignoring reporters’ questions by smugly repeating  just one phrase (“I’m just here so I won’t get fined”) for nearly five minutes.

Apparently for Mr. Lynch, and many other pro athletes today, the joy has gone out of the game. They put up with it, grab their paychecks, and fly off to the Bahamas or Vegas or wherever they go to spend that money. They certainly don’t want to play two.

So, thank you, Ernie Banks, Mr. Cub, for doing what you did. And more important, for being who you were. Thank you for leaving a legacy that hopefully will not diminish with your passing. We need people like you today. More than we know.

[Mitchell here - Steve had this very funny article about Ernie Banks a few years ago - would that it were true!]
Email ThisBlogThis!Share to TwitterShare to FacebookShare to Pinterest
Labels: Baseball, Obituaries