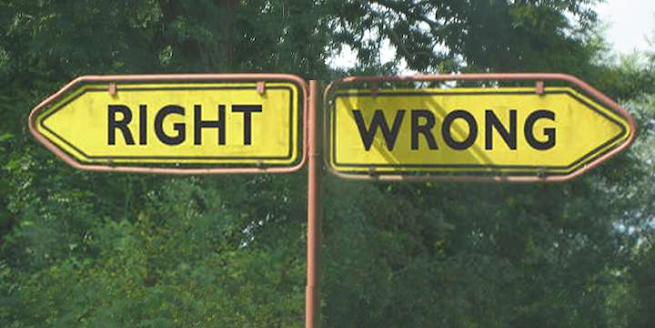 was re-reading C.S. Lewis as I often do, and was struck by this line from Mere Christianity: “Quarrelling means trying to show that the other man is in the wrong. And there would be no sense in trying to do that unless you and he had some sort of agreement as to what Right and Wrong are.”


Lewis advanced that assertion on the way to an argument about the existence of objective moral values, which he believes signifies the certainty of a creator. As do I.


But regardless of whether you follow that reasoning to the same conclusion, the statement itself remains sound. One would think civilized people could agree on accepted definitions of right and wrong. But evidence from experience, current events and probably every debate you’ve had on Facebook suggests otherwise.


That doesn’t make Lewis’s statement any less irrefutable – but it does call into question how actions and behavior that would have clearly been defined as “wrong” 50 years ago are now widely accepted as appropriate. I was born in 1964, and it feels as if I lived the first half of my life in one America, and the last 25+ years in a very different place. Somewhere along the way we lost that common foundation from which meaningful discussions can start.


How did it happen? Certainly the roots can be traced to the 1960s counterculture, which has since become the established culture. But a much bigger setback is the casting of absolute terms like right and wrong into a morass of relativism. Declaring something to be right or wrong is to invite criticism of being too inflexible, or too judgmental. As a result, it’s fair to wonder whether such absolutes can ever again be used with certainty outside of a few especially egregious acts, such as… I started to write the murder of a child, but the Supreme Court took that off the ‘wrong’ list in 1973.


In these times when conservative individuals and institutions grow increasingly reluctant to label any action or behavior as “wrong” lest they be branded as intolerant, the loudest voices at the other end of the spectrum have no such reservations. Led by the unholy triumvirate of mainstream media, academia and the entertainment industry, they have declared much of what used to be wrong to be right.


Examples abound – do I even need to specify them? It’s easy to feel confused and discouraged in such times. It’s why the “Benedict Option” – the withdrawal from an American culture that is no longer recognizable – continues to gain traction. And why in my other blog I celebrate and prefer to watch the kinder television shows of a bygone era.


What should you do when you know something is right from that internal sense that C.S. Lewis attributes to the law of human nature, whilst being surrounded by a culture that sends a contrary message? Is this a moment that calls for fight or flight?


There is another Lewis quote that provides some direction: “If you are on the wrong road, progress means doing an about-turn and walking back to the right road; and in that case the man who turns back soonest is the most progressive man.”


How many people will it take to turn around a culture? Sounds like one of those old and no longer acceptable jokes about how many people of a certain type it takes to screw in a light bulb. We’re going to need a lot more than that. And in my heart of hearts I do not expect it will happen. But I know this: right will always be right, no matter how many people stand against it, because the eternal presence that put that impulse into your soul does not change and does not make mistakes.
Email ThisBlogThis!Share to TwitterShare to FacebookShare to Pinterest
Labels: Culture, Morality, Politics