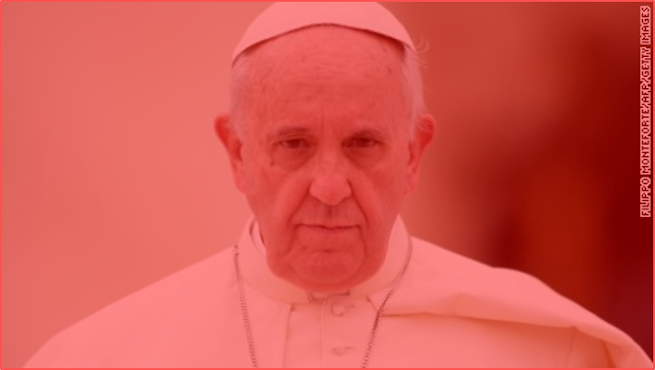 Pope Pius XI famously said of socialism that it "is based nevertheless on a theory of human society peculiar to itself and irreconcilable with true Christianity. Religious socialism, Christian socialism, are contradictory terms; no one can be at the same time a good Catholic and a true socialist.”

My novel The Collaborator features a pope who looks to shake up the Catholic Church by casting off tradition and encouraging the reinterpretation of doctrine. As it turns out, he also happens to have been a collaborator with a totalitarian regime back in his home country, indirectly responsible for the deaths of numerous people through the information he passes along to the authorities. Although it wasn't explicitly stated in the book, the regime in question was certainly one of those from the left - socialist, fascist, Marxist, or even - dare one say it? - Peronist. There were, I wrote, a number of reasons why the future pope had become a collaborator, but although he may have been a sympathizer, it never occurred to me to suggest that he was an outright Communist.

Is Pope Francis a Communist, or at least a socialist? If so, it would seem to be a direct contradiction of his predecessor Pius' statement. Of course, if there's one thing we know for sure about Francis, it's that he doesn't put a lot of stock in statements from previous popes.

What he does seem to put a great deal of stock in, however, is the political theory that has developed in Latin America over the past century or so - particularly what the author Tracey Rowland, in her book Catholic Theology, refers to as "People's Theology," which dates back to the nineteenth-century Argentinian dictator, Juan Manuel de Rosas and are said to heavily influence the pope's own thinking and appear in several of his public writings. Those four principles are:


This kind of Hegelian "cultural-historical" philosophy is a distinct break with Christian anthropology in that it fails to recognize that ideas shape reality, rather than the other way around. It also seems more than a little compatible with Marx's theory of "historic materialism," in which society is seen as "fundamentally determined at any given time by the material conditions—in other words, the relationships which people have with each other in order to fulfill basic needs such as feeding, clothing, and housing themselves and their families." No wonder the pope seems to favor the idea of tossing over traditional Catholic doctrine on things such as communion for the divorced and remarried, people living together without marriage, and other things that might simply be "too hard" for people to follow. There is no such thing as "truth," one could conclude from this - everything depends on time and circumstances. It's all relative, and if that idea sounds familiar, you might be thinking of the "Dictatorship of Relativism" that Joseph Cardinal Ratzinger warned against on the eve of his election as Pope.

We recall other statements from this pope: in talking about economic inequality, he said that “if anything, it is the communists who think like Christians;” when taken to task by some American commentators for his criticisms of capitalism, he replied that "I have met many Marxists in my life who are good people, so I don’t feel offended;” that as a young man he “read books of the Communist Party that my boss in the laboratory gave me.” George Neumayr, author of The Political Pope, quotes the pope as writing that "Inequality is the root of all evil,” and goes on to add,

One can imagine Karl Marx blurting that out, but none of Francis’s predecessors would have made such an outrageous claim. According to traditional Catholic theology, the root of all evil came not from inequality but from Satan’s refusal to accept inequality. Out of envy of God’s superiority, Satan rebelled. He could not bear his lesser status.


Rowland notes that the pope "believes that poverty bestows upon people a moral superiority, and accordingly, that for Pope Francis, the ‘deposit of the faith’ is to be found preserved among the poor living in ‘inner city neighbourhoods,' [sic]" and concludes that "Such a reading situates Pope Francis squarely in the territory of Scannone’s ‘People’s Theology'."

And then there's the pope's apparent willingness to compromise with Communist China regarding government approval of potential bishops, in which the pope “would commit to recognize as bishops only those clerics who first win from the Patriotic Association’s bishops conference.” In case you're not up on your world history, that's the kind of authority that Henry VIII sought, which led to the martyrdom of Thomas More and John Fisher, and eventually the Protestant Reformation. It's sad to think that tens of thousands of Catholics shed their blood to preserve the kind of independence that the pope now seems willing to fritter away. No wonder some Chinese Catholics fear betrayal by this pope.

I don't pretend that The Collaborator represents any form of prophetic warning, although the can be no doubt that the Church has embarked on a downward trend ever since his election*, one that has rapidly escalated in the two years since I wrote the book. I do say, however, with no false modesty, that reading The Collaborator can add to an understanding of the conflict within the Church, and the role which a pope can play in such a conflict.

*Even as he remains immensely popular with those outside the Church and those on the left wing of the Church, each of which maintains an ingrained hostility to Catholic teaching.

Last week the Catholic Church celebrated the feast of Sts. Peter and Paul; the latter the great evangelist to the Gentiles, the former the man upon whom Christ Himself founded His Church. These two walk hand-in-hand: the faith does no good if, as Christ reminded us, the light is hidden under a bushel, while it does no good to share the faith if there is no truth, no substance, to it. For that reason we'll be devoting the rest of this week to looking back at some of our previous pieces on Pope Francis, the man who, for better or worse, sits at the center of the storm surrounding the Church.

The head of the Jesuits, the religious order to which the pope belongs, is often referred to as "The Black Pope" as contrasted to the white cassock worn by the pope. In Pope Francis, we now have the first Jesuit Pope; the question remains - do we truly have a Black Pope, or a Red one?

Want to know more about the crisis in the Catholic Church? Why not read The Collaborator, the suspenseful "theater of the mind" involving a showdown between two powerful men, each of whom has a vision of what the Church is and what it believes in.  The Collaborator "helped me understand Pope Francis better," according to one critic - find out why this story is more important than ever.

Read more about The Collaborator, including reviews and an interview with me, at my author website. The book is also available through Amazon, Barnes & Noble, and other online sellers.
Email ThisBlogThis!Share to TwitterShare to FacebookShare to Pinterest
Labels: Catholic Church, Pope Francis