The new fascists and the end of America 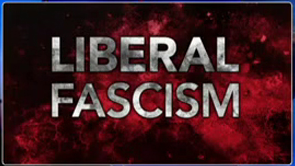 As I've said many times in the past , I draw my inspiration from unusual places. Today, it comes from one of the classic TV blogs I frequent. At Thrilling Days of Yesteryear, Ivan Shreve describes a time that was perhaps a bit too thrilling, a what-if scenario that supposes the British were defeated at Dunkirk, that the Germans invaded in July of 1940, and that World War II took a very different turn. It's all explored in the 1966 movie It Happened Here, and the title of Ivan's article is the thought for the day - really, the thought that everyone ought to keep in mind: "The appalling thing about fascism is that you've got to use fascist methods to get rid of it."

This, of course, would come as no surprise to the new fascists, the campus fanatics trying to destroy any kind of speech that doesn't align with their own belief system. To them, coining a phrase, "error has no rights"; in other words, some thoughts are so egregious, so clearly wrong, that there can be no protection for them, no allowance for letting people consider them and make up their own minds. To the new fascists (and, really, there's nothing new about them), these thoughts are by their very nature dangerous, so dangerous that they cannot even be allowed to see the light of day, and so must be squashed, often in the name of freedom or some such nonsense. In order to prevent people from being hurt, one must hurt; in order to allow people to be free, others must be made less free; in order for all to be equal, some must be superior. Truly, it would make the Fool Killer shake his head and walk away, overwhelmed by the magnitude of his opportunity.

And it proves the point of Ivan's quote: fascism, which is what these people purport to fight (although I doubt they really know what fascism is, because they're ignorant people and they refuse to acknowledge their own behavior), can only be defeated in two ways, and one of them is by resorting to the very same weapon. The other is by education, which is antithetical to the ways and means of the new fascists, for what they call "education" is what a civilized man knows as "brainwashing," or perhaps even torture.

All this is important because of what we see happening down south. As Dreher points out, when the Civil War statues are pulled down and the police do nothing to stop it, a line is crossed, and this is when it ceases to matter which ideological side one is on. It is then that we come to the true meaning behind the founding of the United States, and the importance of the Rule of Law. It is often said that we are a government of laws, not of men, but since the rise of Oprah and the dominance of feelings over logic, this time has been coming, and is now here. When we reach the point where the law can be nullified based on how we feel, then the law loses its moral authority; when the white supremacists begin to pull down the statues of Martin Luther King Jr. and desecrate the monuments to the heroes of the civil rights movements, the same fascists who destroyed defenestrated the names of Lee and Jackson will wail and gnash their teeth, begging the authorities to intervene on their behalf. And what will their rationale be? That Truth demands it? But, in the words of Pilate's eternal question, what is truth? When gender is what you say it to be, when marriage is what you say it to be, when there is no percentage to logic and words mean whatever the situation demands, then is not truth whatever you say it to be? I'll tell you, the police are going to find it pretty damn hard to enforce laws based on that kind of truth.

That, my friends, is why we live in a government of laws and not of men. It's because the law has to apply equally to all in all situations, and it's why the new fascists have just forfeited that protection with their actions this week. Over the decades we've gotten used to the idea that things will turn out all right in the end because they always have, and besides how else can they turn out? Dreher says there won't be a separation, because geography no longer is the determinant of the fissure lines. Maybe that's the case, but Dreher is always a great one for saying what isn't going to happen; he's not very good at saying what is going to happen. And my feeling is that if you can't say what is going to happen, then why should we believe you when you tell us what isn't going to happen?

Logic, and gut feeling, suggest that this madness can't continue much longer without something happening. Not every civil war is fought along geographical lines, but almost every one is bloody. While Google practices intellectual genocide, while the new fascists eviscerate any trace of law, the pressure inside the cooker builds, and builds. When it blows, as it must, it will not be a pretty site. And if the best we can do is keep pressing down on the bubble when it pops up, we know it will simply pop up again somewhere else.