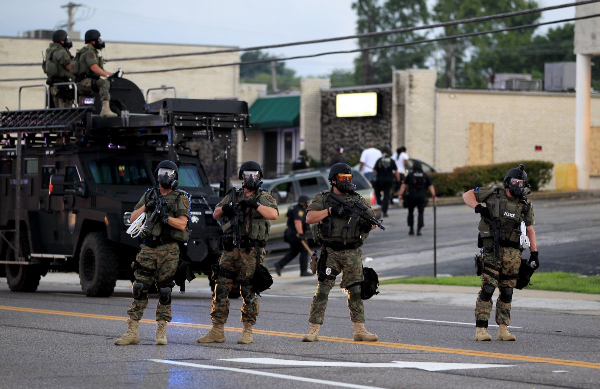 Fox News's John Stossel recently had some interesting things to say about how the police have handled the violence in Ferguson. I think Bobby's right about the irresponsibility of the young man killed by police, but Stossel sounds a cautionary note that the police are hardly blameless, either, suggesting that the increasing militarization of police forces everywhere tells us something about what's happening in American, and that ain't good:

[The Cato Institute’s Walter Olson] notes that a man identifying himself as a veteran from the Army’s 82nd Airborne Division reacted to video of police in Ferguson by tweeting, “We rolled lighter than that in an actual war zone.”

If authorities arm cops like soldiers, they may begin to think like soldiers -- and see the public as the enemy. That makes violent confrontations more likely.

Again, this doesn't excuse the violence of that segment of protestor who's looking for trouble (cough-cough-Al Sharpton-cough), and Stossel makes clear that lawlessness is never acceptable.  But this whole issue with the police is incredibly troubling, something that should have been addressed quite some time ago; but better now than later.  It's further evidence of why the Founders thought we needed a Second Amendment, and proof of their wisdom in understanding that the government, no matter who's in charge of it, should never be completely trusted.  As Benjamin Franklin once wrote, "Those who would give up essential Liberty, to purchase a little temporary Safety, deserve neither Liberty nor Safety."  We know that this quote has been misappropriated many times, for many different reasons, but there's still something to it, don't you think?

Where do we stand on that today?