Wish I'd written that: On idiots and knees and the Anthem 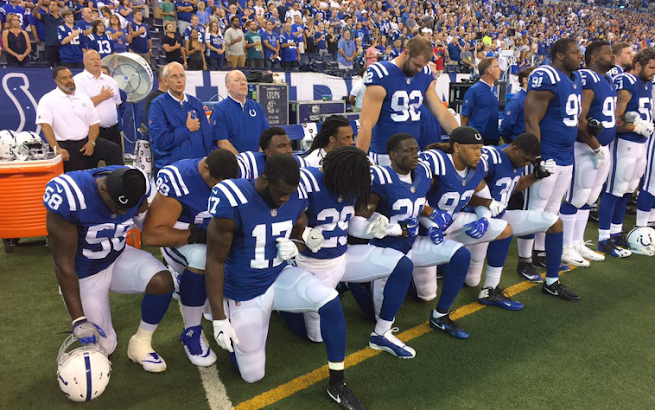 Idiots say idiotic things. It’s like apple trees produce apples…. The most charitable thing that one can say about her book is that it is complete stupidity, because if one didn’t accuse it of being stupid, one would have to say that it was a deliberate fraud.

- Belgian author Simon Leys, speaking in 1983 about Chinese Communist apologist Maria-Antonietta Macchiocchi, who had written a book in praise of the Cultural Revolution.

The thought had occurred to me to write something similar about the athletes using the National Anthem as a form of protest; most of them are, in fact, either dupes, because they believe the lies that are being fed them regarding some of the "injustices" being inflicted by the police, or idiots, because they willingly work to perpetuate those falsehoods, knowing them to be such. Whenever they open their mouths to speak, they simply confirm one or the other. As someone wrote the other day, if an athlete were to take a knee to protest legalized abortion in the United States, would he be so feted by the press and his teammates? I think you know the answer to that one.

There are, in fact, a lot of things wrong with law enforcement in America, things I've written about before (here, for example), and one would be stupid indeed to overlook it. There are a lot of things wrong with race relations in America; the idea of slavery as America's "original sin" is a profound one, and one we still haven't overcome. Still, the idea of multimillionaires who've clearly thrived in America getting down on one knee to protest "injustice" is laughable - no, idiotic.

Most professional sports teams are located in major metropolitan areas: have all the members of, say, the Cleveland Indians, Cavaliers, and Browns pitched in a million dollars or so* to go toward training police officers in hopes that this injustice will be dealt with, at least as far as law enforcement is concerned? I haven't heard anything about it. Does that mean that such an effort would be useless, that racism is so endemic to America that no amount of education short of reeducation will address it? If that is in fact the case, then what good do social protests to, since they'd have even less effect?

*I know that there are some players who truly can't afford a million dollars, those who are at minimum salary (which is still more than I'm likely to see in my lifetime), but I suspect LeBron James can make up that difference by himself.

The same goes for boycotting White House appearances.* I laugh at how shagreened the Golden State Warriors were when they were disinvited to the White House -an invitation that some of them had indicated they wouldn't accept in the first place. The team protested that this would eliminate the opportunity for dialogue on the burning social issues of the day (I can just imagine the quality of that discussion), but those like Stephen Curry, who'd already said he wouldn't go, apparently had already determined that a show of political defiance was worth more than the chance for dialogue. Look at it - these people can't even sing from the same page!

*Which I think are overdone to begin with. Why should the President be considered the nation's number one sports fan? Why should sports be that important? I'd like to see the institutional cult of personality that surrounds the presidency be eliminated for that reason, but it's another topic for another day.

In the end, the most damning thing one can say about the United States is that we as a people put so much stock in the opinions of celebrities and athletes in the first place. Haven't we heard them complain, usually after having been arrested or called out on some other kind of misbehavior, that they didn't ask to be role models in the first place? And yet now they decide they want to be social advocates? It is to laugh. Perhaps if we're that shallow, then we won't be capable of elevating our national IQ to the point that we can have a serious discussion on race, sex, politics, or anything else. Instead we'll just sit around trading opinions on the cover stories in People, Rolling Stone, Cosmo, Us, and Sports Illustrated (yes, it's come to that). We'll find out not only who's taking a knee, we'll also address such burning issues as whether or not Kylie's pregnancy will change things, if Jen's marriage will survive, the truth behind the breakup of Brad and Angelia, how to drive your man wild in bed, and other screaming headlines. They're all equally important.

Leys is right. They are, for the most part, idiots, so we should expect nothing less from them. Because, to paraphrase his words, in doing so we're being charitable. The alternative is that they're out-and-out frauds, and that wouldn't be a nice thing to say, would it?
Email ThisBlogThis!Share to TwitterShare to FacebookShare to Pinterest
Labels: Politics, Sports