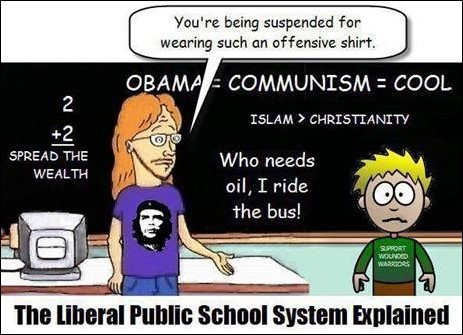 In comparing textbooks used in religious schools and humanist schools, the books used by humanist schools promote liberal propaganda endlessly.  One of the most notable examples was glorifying the single American legislator who objected to sending the troops to battle days after Pearl Harbor was attacked by the merciless Tojo's forces representing Japan.  Others have been creating new liberal heroes such as Milk and Obergefell, and even Barbara Lee (the Congressman who refused to send us to battle after we learned Saddam Hussein was a terrorist, especially when he funded families of homicide bombers with cash for performing the terrorist actions;  Fox News' Neil Cavuto said those who paid families of homicide bombers who killed as many Jews as possible were just as much terrorists as the bombers.  As we've seen with the initial starts of protests against the American flag as a symbol of slavery, it references what Jason Whitlock calls "San Francisco Values" advanced by these textbooks of propaganda, and denouncing American historical events such as the American Revolution, War of 1812, and the Civil War.

In a recent commentary marking the 20th anniversary of Rich Mullins' death (see "The Cruelest Irony" on this blog for a reference to "My Redeemer" winning the GMA Dove Award for Song of the Year, since he was thrown from his Jeep without seat belt when he and song co-write Mitch McVicker were thrown from a Jeep on their way to a concert; the presenter was a triple MENCS champion), a columnist noted how the latest top-40 hits from the entertainment giants quickly replaced all songs of the past.  In the same manner as that in many churches, we are seeing that with those who disregard American history.  They remove all references to US history of the past and replace it with their "new narrative" of new left-wing heroes as we've mentioned in order to teach new generations only their new narrative.  As the Young America's Foundation noted, "Many on the Left have tried to turn (Patriot Day) into a 'day of national service' or a celebration of tolerance, instead of remembering that radical jihad attacked this nation because of our western values. "  Both of these go hand-in-hand with the shameful erasing of the past (see Deconfederatisation) and advancing the new heroes.

As such, look at the attacks on Francis Scott Key and Fort McHenry even in Baltimore, and the entire change in the "new narrative" they want us to advance.  Has a generation taught the Left's new narrative given us this fiasco?