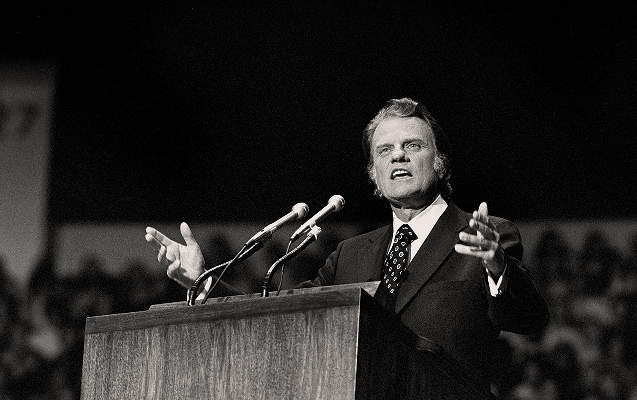 I s it possible to know someone not by who they are, but by who they aren't? Billy Graham wasn't the faith-healing huckster Oral Roberts, who lived lavishly and once told people God was holding him hostage to get them to contribute more money. He wasn't the Elmer Gantry-life Jimmy Swaggart, who married a 15-year-old and dallied with hookers; he made it a point to never be in a room alone with a woman with the door closed. He wasn't Jim and Tammy Faye Bakker; he never served time in federal prison, nor was he associated with industrial-strength cosmetics. He wasn't Joel Osteen, preaching the prosperity gospel in a megachurch that used to be a professional basketball arena; in fact, he never pretended to be a pastor at all. He was a preacher, who always sought advice from his own pastor. He didn't run for president like Pat Robertson; instead, he counseled them. He didn't have his own television network, he didn't live in a mansion, he never was implicated in personal scandal. That was who Billy Graham wasn't.

Who Billy Graham was was a man who appeared 60 times on Gallup's list of the world's most admired men, who integrated his own crusades in 1953, who preached with Martin Luther King Jr. and once bailed him out of jail, who sold out Madison Square Garden in New York for 16 consecutive weeks 1957, who understood the power of radio and television and used it successfully in a way few ever have. (His radio program, Hour of Power, continued for 60 years.) As a dynamic speaker who could mesmerize television audiences as well as those viewing him in person, he was rivaled - perhaps - only by another evangelist, Archbishop Fulton J. Sheen.

Let's talk a bit more about Billy Graham and television. Those sold-out crusades in New York City in 1957 were telecast on ABC, Saturday nights from 8:00-9:00 p.m. Today, it would be unthinkable to see such programming on a national broadcast network, but it was the first of four times Graham would appear regularly with his crusades on ABC over a two-year span. Later, when the networks banished such programs from their their regular lineups, Graham would appear on syndicated broadcasts carried by massive numbers of network affiliates; those stations, who would gladly preempt network programming in order to gain advertising revenue, carried Graham's crusades commercial-free. Granted, the time was bought by Graham's organization so it wasn't as if the stations were being totally altruistic, but neither were they ignoring that which appealed to their viewership.

I don't know how many people came to Billy Graham through television, who found their way to a relationship with Christ that changed their lives; I think you could plausibly argue that he had a greater direct impact on his viewers than any other star of any other television program that has ever been shown. Although he didn't preach my particular brand of Christianity, I would sit mesmerized listening to the man speak, and seldom heard anything I could disagree with. Watching the young Graham preaching from the Garden, there is a power, a magnetism, a fire, to his words that is almost astounding - if you've only heard Graham in his later years, even in the '70s when he'd become somewhat less the revivalist preacher, you owe it to yourself to look up one of his sermons online; his own website has many of them, and be reminded of the power of speech.

For many years, Graham was associated with the Twin Cities, his headquarters being in Minneapolis, and he appeared here with his crusades several times, but I saw him in person only once, in the '90s when he was older and more frail. So unassuming was he that when he took to the podium to speak, not everyone realized it at once. But when he did speak, it was as if time had stood still, perhaps even wound its way back a decade or two. Standing there preaching about Christ and salvation, his face was animated, his voice strong and clear, and it was obvious that during a half a century of preaching, the externals may have changed - the celebrities who appeared with him, the hairstyles, the clothing - but the message never changed.

After his death last week, The Wall Street Journal asked rhetorically whether or not there would ever be another Billy Graham. The answer, of course, is no; there is never a second version of a one-of-a-kind. The question, I think, is whether or not this medium, present as it is in today's culture, will ever see anyone like him again. Forget the message, think only of the man and the way he penetrated the camera lens and met the viewer wherever he or she happened to be, physically or emotionally. The answer to that, without doubt, is also no.

Cross-posted to It's About TV!
Email ThisBlogThis!Share to TwitterShare to FacebookShare to Pinterest
Labels: Billy Graham, Obituaries, Religion, Television