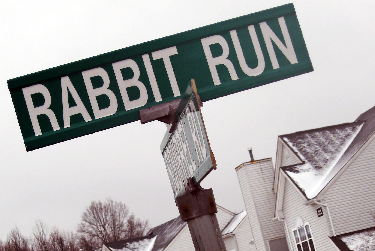 Over a 41-year span, American novelist John Updike wrote a series of  stories featuring former high school basketball star Harry Angstrom – Rabbit, Run (1960), Rabbit Redux (1971), Rabbit is Rich (1981), and Rabbit at Rest (1990), which closes the series, but then truly concludes with the offspring in Rabbit Remembered (2001), the last before his death.  The stories, as you might expect, were set in the era of the 1960's and beyond.

As Casey-Werner and ABC planned the “series continuation” of Roseanne as a limited-run series, this revival seems to put the developers of the show and the viewer into those who remembered Mr. Updike's Harry Angstrom franchise.  Whereas the original show was Rabbit, Run, this series could be a mix of Rabbit Redux and Rabbit is Rich.  How many times does a viewer ever think when a television show airs its series finale after a nice long run what would happen the characters in the show?  When looking at what people would think, we have the influence of the Angstrom series, and also Cynthia Cidre's short-lived Dallas continuation earlier this decade on TNT that sadly died with Larry Hagman's death.  But unlike Cidre's Dallas, which featured minor characters such as the son of Kristin Shepard and of course the son of John Ross Ewing, Jr, that viewers did not see on television in the original era, and how the heirs to the empire wanted a hold of Ewing Oil, the Roseanne continuation now takes Roseanne as a grandmother, with the child actors of the show now being parents themselves.

The Grandmother Roseanne, with the issues that are reflective of Tim Allen's Last Man Standing, has taken much of its influence from both Cidre and Updike.  People think Hollywood has lost its creativity with too many reboots, retellings, and the rest.  But I ask if making a well-known character, with the same cast, now as a grandmother controlling her children and the confusion of modern-day leftist propaganda, with the grandchildren's parents played by the former child stars on the same show, would sell in an era where America is confused by elites.  As father knew best in the 1950's, what will Grandpa and Grandma Conner do in trying to teach discipline to an era that needs it now?  Think about it when we consider this short series.  Is this Roseanne a hybrid of Cynthia Cidre's Dallas and John Updike's Rabbit sequels with a touch of Tim Allen's Last Man Standing as we imagine the Conner family now, with Roseanne and Tom being grandparents?  Maybe this will appeal to those who remember the original series and want to see how crazy the children have become, and what the grandmother now has to deal with leftist propaganda in schools.