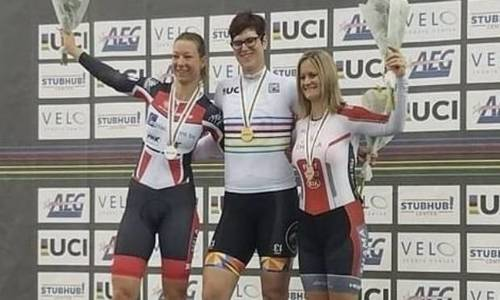 The awful "hair band" called "Aerosmith" is back in the news again.  We remembered how Mr. Tyler did awful National Anthems at major events that caught those of us who sing.

But this time, one of their songs is in the news.

In Los Angeles, at the StubHub Center complex, the women's track cycling UCI World Masters Championship has drawn the ire of many as a college professor -- a man who claims to be a woman -- won the Women's 35-39 group.

This time, that awful song from Aerosmith, "Dude (Looks Like a Lady)," rings true.  The winner was a "Dude (looks like a lady)," and the real ladies lost.  This is Obergefell's "right to dignity" at its worst again.  Remember Dale Saran's warning in Jonsson v. CrossFit, which the Dude (Looks Like a Lady) won primarily because of Obergefell and the Exxon Mobil Payback.

"The fundamental, ineluctable fact is that a male competitor who has a sex reassignment procedure still has a genetic makeup that confers a physical and physiological advantage over women."

What gives?  Avery Brundage and Dale Saran were right.  How come a few judges reminiscent of that book in the Bible where they do what feels right in their heart have rights nobody else has?