Giving up the pope for Lent 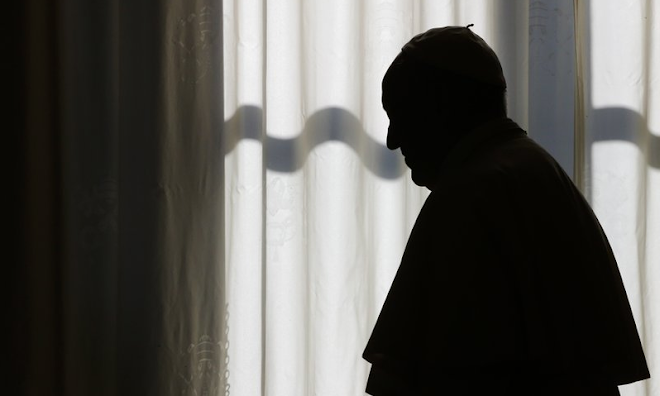 If you’re wondering why I haven’t written anything about the pope lately—well, it's Lent. Usually you think about giving up something good, or fun, for Lent. Cookies, chocolate, movies, things like that. But you also give up things in order to improve yourself, and nowadays just about any time you read about the pope, it becomes a near occasion of sin—an opportunity for anger, for detraction, for an entire variety of sins. So think of this as me giving up kvetching for Lent—or trying to, anyway.

In truth, though, there doesn’t seem to be much more to be written or said. As you probably know, I haven’t been shy about letting you know I’m not a fan of the incumbent pontiff; I even wrote a book about it a few years ago. It isn’t that there’s no news being made, nor is it that the pope has lost the power to shock or dismay. Sadly, that kind of thing still seems to be a frequent occurrence. Perhaps one can be heartened that more and more Catholics appear to be waking up to the damage this pope and his sycophants are doing to the Church, and yet the people who now hear the music aren’t, by and large, those who can do anything about it.

No, while I haven’t given up hope that things will change, it seems to me that just about everything that can be said about it has been said. It’s all so much preaching to the choir now, trying to find different ways to say what you’ve already said ten or a hundred or a thousand times before. It’s kind of like pounding your head against a wall, and I have enough problems with headaches that I don’t need to incur any more self-inflected damage.

Much of what has happened during the tenure of Pope Francis serves as a reminder that good and evil both exist in the world, and that there’s very little left that can truly surprise. You read a lot from people who use words like “breathtaking” to describe the latest egregious statement from the Vatican, but it’s easy to forget that there have been bad popes before, and we’ll probably continue to have them until the end of time. It is true that social media has a way of magnifying this evil, of expanding upon it and bringing it to light in a way that wasn’t possible with the Borgia popes, for example; it’s also true that a bad pope can do far more damage to the world today than he might have been able to do in the past, due to the ways in which the world is more interconnected than ever. So I’m not trying to minimize things when I say this, nor am I suggesting that people shouldn’t be angry with what they hear coming from the Church. One more sex scandal, one more coverup, one more statement of heterodoxy, one more line being drawn in the sand.

And the point is—what? That there simply isn’t any more to be said. There can be no more surprises to come from Rome, only continuations of what has come before. There is no pleasure to be derived from the umpteenth reference to the latest outrage, and no way to dress up the outrage that accompanies it. It’s tiresome, and it’s fatiguing. It’s also demoralizing and despairing, things that no Christian should allow to creep into his or her life.

In the end, then, there’s just not much that can be said. But whether it’s the first time you’ve heard it or the hundredth, that doesn’t prevent it from hurting, and confusing, and angering. It doesn’t prevent the honest person from acknowledging the wrongs that have been done, and it doesn’t prevent the dishonest to reiterate that there’s nothing to see, move along. It has, perhaps, accelerated the process of separating the wheat from the chaff, and that’s probably a good thing.

Otherwise, it’s more like a scab that, having passed the stage of causing pain, now itches with an insistence that is unstinting. We want to scratch that itch, we want to do it badly, even though we know we shouldn’t. It takes a lot to resist scratching it, picking at it until it begins to bleed. The itching, however, is a sign of change, of healing. If we leave it alone, it will eventually go away. But it feels so good to scratch it, just for a moment… (If I were to scratch, it would probably look something like this.)

For me, there’s no pleasure in picking at that scab. I still read about what’s going on; ignorance is never a good response to anything. It’s just that, well, I’ve run out of things to say about it, and about him. Until something new comes along, silence is the best I can muster. Would that the pope tried silence as well, even just once. It would save us all a lot of picking and scratching.
Email ThisBlogThis!Share to TwitterShare to FacebookShare to Pinterest
Labels: Pope Francis