Pope Francis Releases NCAA Bracket; Has Gonzaga Winning It All 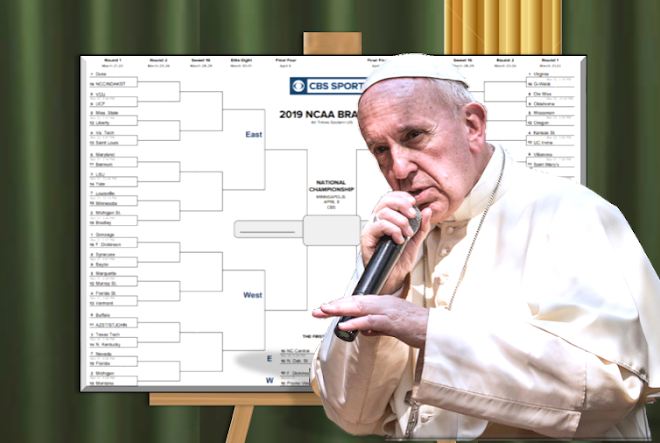 (VATICAN CITY, MARCH 21) - Pope Francis announced his NCAA Basketball Tournament bracket today, and revealed that he thinks the championship will be won by the Gonzaga University Bulldogs.

In an exclusive interview with the Vatican newspaper L’Osservatore Romano, the Holy Father admitted that although he hadn’t had as much time to work on his bracket as he has in the past, he still feels confident about his selections.

“Gonzaga,” Francis said without hesitation when asked who he had winning it all. “I just have a feeling this is finally their year. Marquette could give them some trouble in the Sweet 16, but it they can get past them, I think they will go all the way."

In addition to Gonzaga, Francis’ other Final Four picks are Saint Louis in the East, Seton Hall in the Midwest, and defending champion Villanova in the South. When asked if he'd chosen Gonzaga because of its Jesuit connection, the Pope, himself a Jesuit, smiled. "We must stick together," he said. “I cannot say anything bad about the other teams, though. After all," he added to laughter from the reporters present, "who am I to judge?"

The Pope revealed that he had discussed his predictions with Emeritus Pope Benedict during a phone conversation the two had on Tuesday, but declined to reveal who the former Holy Father had winning the title. “I know he followed the selections avidly on Sunday. He and I disagree on some of the regions, but if he wants to share his choice with the world, I assume he will do so at the proper time.”

Francis expressed appreciation that this year’s Final Four, to be played in Minneapolis on April 6 and 8, does not conflict with Easter. “With the liturgies on Holy Thursday, Good Friday, Holy Saturday and Easter Sunday, it can be difficult to keep up with the results. Thankfully, this year that will not be the case.”

The Pope chuckled when asked whether his election as Supreme Pontiff of the Roman Catholic Church means that his bracket is now to be considered infallible. “The Catholic faithful are under no obligation to follow my predictions,” Francis said. “In fact, my colleagues in Buenos Aries might suggest one would better off if they didn’t. But it has been a good month so far - perhaps it is a sign that my luck is changing.”