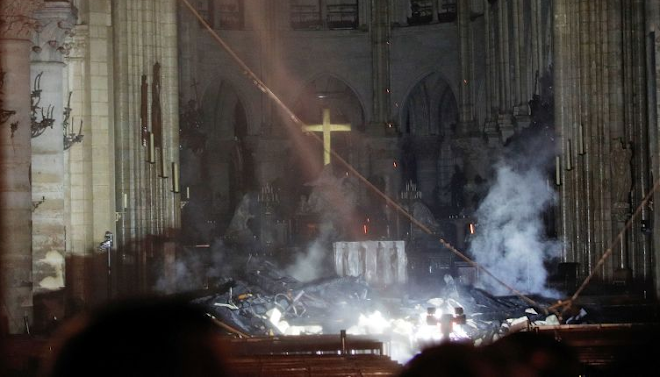 Like millions around the world, I watched the images of Notre Dame engulfed in flames. As a Christian, though not a Catholic, it was devastating.

I’ve been to Paris twice, and both times a visit to the cathedral was essential. One cannot help but gaze in astonishment at its overwhelming beauty and majesty. I did not attend services there, which I regret now, but the first time I entered I had the pleasure to witness a wedding taking place within its hallowed walls. That made the moment even more special.

And now much of it is gone.

A cause will be identified for the fire, while people of faith will debate whether its destruction was a simple accident, or if there is some deeper meaning to be found in its loss. How could an 800 year-old structure that survived a bloody revolution and two world wars be gutted by an extreme makeover?

We should always be cautious to ascribe earthly tragedies to divine intervention. But somehow it seems a little harder to dismiss this time.

Governments throughout the civilized world sanction the murder of millions of unborn children, and applaud (not just figuratively but literally) legislation that makes it easier, not more difficult to expand these grim statistics. We take legal action against memorials and monuments with a religious connotation. We mock those who pray after tragedy, expel God from schools and cheer every time the popular culture takes another step away from grace and civility.

And while secular society ceaselessly strives to eradicate any reference to faith from our culture, the perversions and prevarication of far too many who represent the Catholic Church have hastened its path to obsolescence, and only made it easier for its enemies to advance their agendas.

In times like these, in Easter week, how could one not see a message being sent by the destruction of this magnificent, holy edifice? How can we not draw a conclusion from the loss of a place that symbolized reverence for the divine, and for life, and for beauty? Our world may finally have become too ugly to sustain such treasures.

President Emmanuel Macron has vowed to rebuild. That’s good. But in today’s France, where 5% of Catholics attend Mass, and atheism is more popular than Jerry Lewis, the loss of a cathedral carries no more meaning than the loss of a theme park attraction. Oh, well, now the tourists will just have an extra hour to visit Disneyland Paris.
Email ThisBlogThis!Share to TwitterShare to FacebookShare to Pinterest
Labels: Christianity, Culture