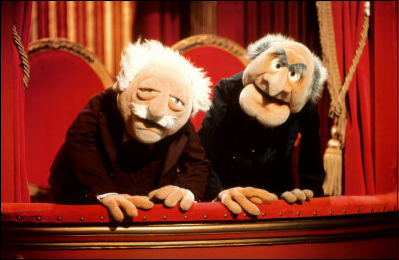 S'm not sure if Mitchell will be covering this at the TV blog, but in case he doesn't, take a look at the following:

What were previously sly winks to a grownup audience are now grotesque full-body grimaces, delivered with depressing sledgehammer brutality. In one scene, Animal laments his consequence-free promiscuity. In another, Zoot from The Electric Mayhem is outed as an alcoholic. And then, most heartbreakingly of all, there’s Kermit.

This version of Kermit is absolutely unrecognisable from anything that’s ever come before. This Kermit badmouths fellow celebrities, openly discusses his sex life and, at one point, describes his life as “a living hell”. That’s not who Kermit is. Kermit is the perennial wide-eyed optimist, the figure who grounds the chaos around him in sincerity. Kermit is the dreamer who believes in the power of people. He’s the one who sings The Rainbow Connection. He is most definitely not the stress-eating, coffee-drinking executive that The Muppets paints him as. It physically hurts to see what ABC have done to him.


Rod Dreher points out that all this comes back to Disney, which doesn't surprise me in the least, considering the liberal political attitude of the company and how some of their ABC Family programs include homosexual relationships.  California is due for a major earthquake soon; my question is whether it will be caused by Jim Henson spinning in his grave, or Walt Disney spinning in his.
Email ThisBlogThis!Share to TwitterShare to FacebookShare to Pinterest
Labels: Disney, Television