The Emmys and the President's Official Delegation for the Holy See: Sin (and perversion) being promoted 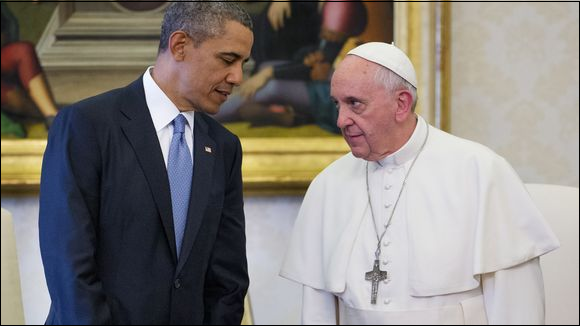 Antonin Scalia, in his dissent of the sexual perversion movement's landmark case, made importance in his opening paragraph regarding the configuration of the courts being dominated by elite educational institutions in two hard-left corners of the nation, and how these institutions have an absolute monopoly over an entire branch of the government.  As previously noted by Sean Hannity in a February 2014 broadcast, the entertainment, and we now know, advertising, agencies are completely out of touch with the rest of the nation.  What sells in Hollywood, Stonewall or the Castro District (which seems to be the basis for every acclaimed show or ad) does not play in Peoria, let alone your heartland of America.

The Emmy Awards proved Mr. Scalia's point of elites, as the awards have now become a celebration of the elites and their ideals that cannot win in the heartland, but rely on these few areas to force their way through.  The major awards at the ceremony were given exclusively to premium pay television programming, with broadcast network television being shut out of the show.  The winning premium pay programming (HBO, Showtime, Netflix, Amazon Prime) is complete with themes that pander only to Hollywood values in an attempt to mandate social change that mocks, rejects, and now criminalises, the Bible, while appeasing all forms of sexual perversion as part of the Erotic Liberty push, in effect declaring, as has been wanted by Obama Administration official Chai Feldblum, sexual freedom is the only freedom, triumphing over all other beliefs, even if over 75% oppose.  Acceptance speeches of these winners, whose shows cater to these elites but not watched by the people because of the elite status of premium pay television, were transformed into political rallies of this tiny corner to advance the next cause of these leftists, whether it was to advance socialism, increased government intrusion, sexual perversion propaganda, or attacking those with a Biblical worldview.  Consider the pushing of one such sexual perversion by an award winning series available on premium pay, and how the speech by the show's developers was based around pushing special rights for boorish behaviour.

In the movie industry, film studios cut scenes from movies to avoid an adults-only movie rating, which depending on industry or national authority, will be declared X, NC-17, 18+, or similar rating, since an adults-only rating will be rejected by the theatres, as such movies would force an entire theatre multiplex to be adults only for the day, similar to the Kyle Busch Rule with regards to tobacco.  But on television, the same adults-only rating, known as TV-MA, is now regarded as superior writing and acting, and wins the major awards, despite only appearing on premium pay television.  Why is there such a double standard?

(NOTE:  Kyle Busch was 16 when CART ejected him during the 2001 NASCAR Camping World Truck Series race at Auto Club Speedway since the American Racing Wheels 200 Truck race was part of the CART FedEx Championship Series Marlboro 500 presented by Toyota weekend, and the Tobacco Master Settlement Agreement specifically prohibits participation of persons under age 18 years if any event on the schedule carries tobacco sponsorship.  Four CART Champ Car teams were sponsored by tobacco firms that signed the agreement – Phillip Morris (now Altria) and British American Tobacco, meaning Busch could not participate in the event, even though NASCAR sanctioned that race only, CART enforced the federal tobacco regulations.)

The President's official delegation for the Holy See's visit to the nation once again shows how the elites see faith.  It is another list full of sexual perversion, a quasi-victory lap of the Hollywood and academia elites over the entire nation that has voted over 4:1 in many states against the perversion agenda.  Once again, as he has mentioned about the decline of nations thanks to sexual perversion, Владимир Путин is correct.  This Administration is pushing the wants of a few elites in Hollywood as seen in the Emmys, much to the opposition of the entire country, with this list for the Holy See's visit.

Is there any more wicked standard for this President other than the sexual perversion crowd?
Email ThisBlogThis!Share to TwitterShare to FacebookShare to Pinterest
Labels: Morality, Politics, Religion, Television