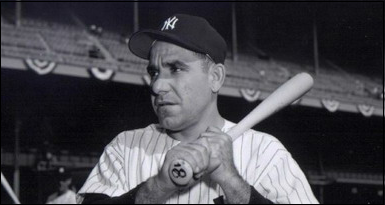 Lawrence  Peter (Yogi) Berra passed away earlier this week, at the age of 90. This remarkable Yankee catcher had an even more remarkable career, participating in World Series as a player, coach and manager. He was an All-Star selection 15 times. He won his league’s Most Valuable Player Award three times. As a manager, led both the Yankees and the Mets into the World Series.

Yogi didn’t look like an athlete; his somewhat squatty and dense, 5’8” frame made him look more like a construction worker than a professional ballplayer. He had that broad face and those protruding ears. (“You’re ugly, Berra,” a rival catcher told him one day. “I don’t hit with my face,” was Yogi’s reply. Along with a double into the gap.) You could see why one day years later Yogi would inspire a cartoon character. Yes, that famous bear.

Yogi Berra was no Joe Dimaggio, some might say.

But while Dimaggio, the graceful Yankee Clipper, is praised for striking out only 369 times in his entire career,  Yogi, also a power-hitter, struck out only 414 times in nearly 1,500 more plate appearances. Percentage-wise, Yogi tops his legendary teammate on that one. “You could,” as their shared skipper used to say, “look it up.”

Yes, Yogi was an athlete. A great athlete. And one of sports (all sports) greatest winners. From 1957 through 1981, the New York Yankees were in the World Series 13 times. Yogi—as a player, a coach, a manager—was on every one of those teams. 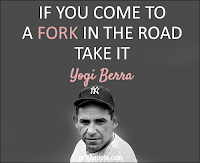 He got more famous later for his “Yogi-isms,” those witty, seemingly spontaneous comments he made (or supposedly made) about life. (“When you come to a fork in the road, take it,” is one often quoted.)  Those funny sayings sold books and t-shirts. They shouldn’t make us forget what an amazing athlete Yogi Berra was.

Let’s imagine a Yankee Mt. Rushmore. Who should be up there? Babe Ruth, arguable the greatest baseball player of all-time (and a giant of a character himself), is so far above everyone else that we’ll let him be the foundation that this Rushmore sits on. On the mountain itself has to be Lou Gehrig, Dimaggio, and Mickey Mantle. We will officially add the fourth right now: Yogi Berra.

Yogi’s talents, his child-like enthusiasm while playing a man’s game, his almost Forrest Gump-like prowess for being right in the middle of so many memorable baseball moments (including calling Don Larsen’s perfect game in the Series of ’56), his ability to embody a baseball  era like few others—it all adds up to quite a career, and a life. Oh yeah, he was a 19-year old American soldier who hit Omaha Beach on D-Day. Yes, there is a lot to say, and to remember, and to honor, about Yogi Berra.

My wife and I operate a Bed & Breakfast in a small town in southeastern Minnesota. This morning, eight new guests gathered around the breakfast table. These first moments can be a little tense, awkward even, for people who’ve never met who are about to share a meal together.

These folks, from Nebraska, Minnesota, and Iowa, smiled politely and seated themselves quietly. One young man was wearing a Kansas City Royals shirt. Mention was made. The conversation would start with baseball.

“Did you hear?” one woman asked the group. “Yogi died this week.” No prompting was needed. They all knew who she meant. Immediately the early table tension melted. There were knowing smiles all around. “He was so funny, the things he said,” said another lady. Soon they brought up shared memories of that stubby little Yankee catcher with a gift for making people smile. These were not sports fans, baseball fans. But somehow they all knew Yogi. They were Yogi Berra fans.

I was trying to think of another American professional athlete in the last 50 years who could do that for people. (Last century even.) An athlete that ordinary people could relate to, and not just admire, but genuinely like. An athlete who seemed authentic and approachable.  It did help that Yogi was a hugely gifted athlete, one of the best of all time at his position.  But that wasn’t the most important thing about him. It  isn’t what people immediately and fondly recall.

How many of those athletes are there? A handful at best. One was certainly Yogi Berra. And now he is gone.

“It ain’t over ‘til it’s over,” Manager Yogi Berra famously told his Mets players in the summer of 1973, stirring them to an improbable World Series run. With his passing, it is over. And it’s all a little bit sadder.
Email ThisBlogThis!Share to TwitterShare to FacebookShare to Pinterest
Labels: Baseball, Obituaries, Yogi Berra