Baseball Week: Yes, yes, no, no 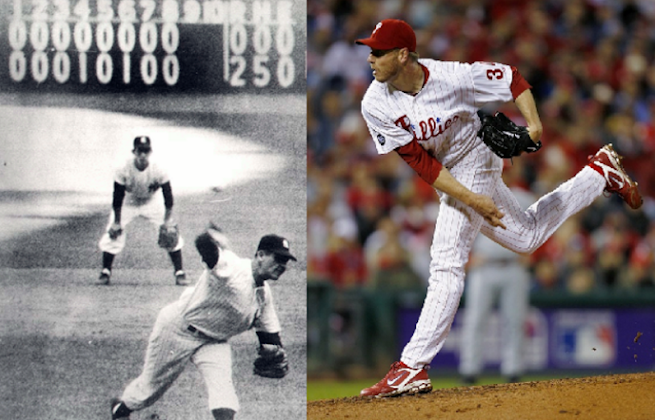 As we continue our salute to baseball's opening week, I'm reminded of the end goal for each team: the playoffs and, hopefully, the World Series. Back in 2010 the Phillies' Roy Halliday slew baseball's great white whale, the post-season no-hitter. It was only the second such time it had happened in baseball's long history, and as I wrote at the time, it becomes even more impressive the closer one looks at it.

There was, not surprisingly, only one topic of conversation around the sports water cooler this morning, that being Roy Halladay's no-hitter in Philadelphia’s opening game against Cincinnati yesterday. As just about everyone knows by now, Halladay’s was only the second no-hitter ever thrown in postseason play, joining Don Larsen’s perfect game in the 1956 World Series.

Oddly enough, this was the very thing I had been planning to write about tomorrow. Not Halladay's no-hitter, of course, since he hadn’t thrown it yet, but Larsen’s. October 8 is the 54th anniversary of Larsen’s perfecto, and for the hard-core baseball fan that date triggers a Pavlovian response in much the same way that July 4 or November 22 or December 7 do to the historian.*

* I don’t mean in any way to equate Larsen’s no-hitter with these other dates, some famous and some infamous. It’s just that if you say “October 8” to the aficionado, many of them would immediately respond “Larsen.” It just does.

I’ve long thought that Larsen’s performance was perhaps the most remarkable in the history of sports, or at least baseball. This piece by Cliff Corcoran lays it out very well – we’ve had postseason baseball since 1903, when the first World Series was played. From then to 1956, a span of 53 Series (there was none in 1904), you had a maximum of 371 games that could have been played. In all that time, there was only one no-hitter.

Since then, we’ve added a Championship Series in each league (starting in 1969), expanded it from five to seven games (in 1985), and added a Wild Card round (in 1995), meaning that in the 53+ years since Larsen, you’ve had a maximum of 1,245 games that could have been played, or almost four times the potential number since Larsen.* And in all that time, with all the opportunities we’ve given them, no pitcher was able to match Larsen until last night. If that doesn’t meet the definition of remarkable, I don’t know what does.

* I know, many if not most of these series went less that the maximum, but you get the point.  And anyway, I didn't have the time to count all the games.

And why should this be?

Well, one obvious reason is that pitchers aren't conditioned to go nine innings anymore.  Their charge is to get six or seven good innings, then turn it over to the bullpen.  Which means today's pitchers may not have the physical or psychological fitness to go the distance, even if they're being fueled by the adrenelin of a no-hitter.  Halladay led the league in complete games this season, and I don't think that's a coincidence.

Then there's the pressure of the post-season.  This seems to me to be the explanation that makes the most sense.  Just because we're told by the television people that the postseason is "a whole new ballgame" doesn't mean it isn't true.  The pressure of a short series, combined with the national spotlight, was bad enough before 24/7 sports channels came along - now, it's probably been magnified three or four times.

(There is a flip side to this, however, namely that the pressure can work both ways, producing performances that might be beyond the normal expectations from a given pitcher.  That was certainly the case with Larsen, who was little more than a journeyman either before or after his perfecto in the pivotal fifth game*, and it might have played to Halladay's advantage in the crucial opening game yesterday.**)

* With a series tied at two games apiece, as it was in '56, the fifth game is always pivotal.  You could trademark it.

This morning I heard someone saying that, statistically, there have been too many no-hitters in the postseason, or at least more than the odds would suggest.  I know, that doesn't sound right at all.  But, according to the stats, .1% of all regular season games result in no-hitters, whereas the figure is .2% in the postseason.  Whatever.  I'd guess, if I had to, that it might have something to do with the number of bad teams playing bad games in the regular season.  One could argue, as I do, that if the best hitters make the postseason, that makes it harder to throw a no-no.  But you could also argue, I suppose, that having the best pitchers in the postseason makes a no-hitter more likely.

In the end, I think this is something where you have to selectively ignore stats.  Fact of the matter is that we've had more than one hundred years of postseason baseball, and until last night there had only been one no-hitter.  If we have two or three more in the next decade, maybe we'll have to revisit the whole thing.  But until and unless that happens, I'm sticking by my original thesis that Larsen's perfect game was the most remarkable, the greatest, pitching performance of all time.  A no-hitter in the World Series would have been incredible enough; Larsen's perfect game, the first in 34 years, defies description.

And that makes Halladay's perhaps the second greatest.
Email ThisBlogThis!Share to TwitterShare to FacebookShare to Pinterest
Labels: Baseball