Flashback Friday: War as a metaphor for war 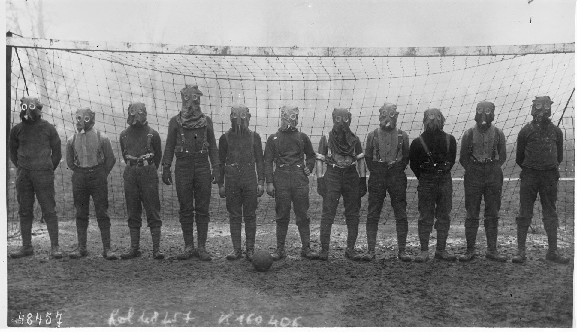 This extraordinary photo, of gas-mask-wearing soccer players (likely soldiers playing the game during some training or down time) accompanies Brian Phillips' equally-extraordinary account of soccer during World War I, "Soccer in Oblivion,"  at Grantland. For me, World War I has always held more fascination than any war other than our own Revolution, because the cultural implications are so distinct.

While it's important to acknowledge, as Spengler does in this Asia Times piece, that World War I wasn't necessarily any more horrific than other wars of the past, at least in pro-rated manpower, it's also true that the Great War inflicted a kind of cynical somberness that the world likely will never recover from.  The thought of God looking down on His creation, all of it, doing its damnedest to tear itself apart, is a sad one, perhaps one of the saddest that a religious person can imagine.

The money quote from Phillips' story, which should tell us everything we want to know about the war, and about ourselves, then and now:

Never such innocence again. But we still make the same mistakes, because we still understand war through analogy and our analogies still fail. Now we see it as a video game, or we see it as a component of the NFL’s set of minor paraphernalia, jet flyovers part of the same combo pack that includes beer commercials and classic-rock riffs. We’re still trying to make the metaphor work, only now we’re doing it in reverse, endlessly describing games in terms of who conquered/eviscerated/bombed/slaughtered whom. It’s the same old trick, though. It’s a way to hide the horror under one layer of spectacle and another layer of moral virtue — a way to pretend that war is like a game, that there are rules, that there is safety. A way not to look into oblivion. We missed the cruel irony in all those soccer balls that show up in World War I photos. Nothing is a metaphor for war. War is a metaphor for nothing.


Make no mistake - war, no matter how horrible, is sometimes necessary.  That should happen sparingly, and without celebration, though.  As the soldier (attributed to Robert E. Lee, perhaps apocryphally) once said, “It is well that war is so terrible, or we would grow too fond of it.”