Does terrorism have to be the “New Normal”? 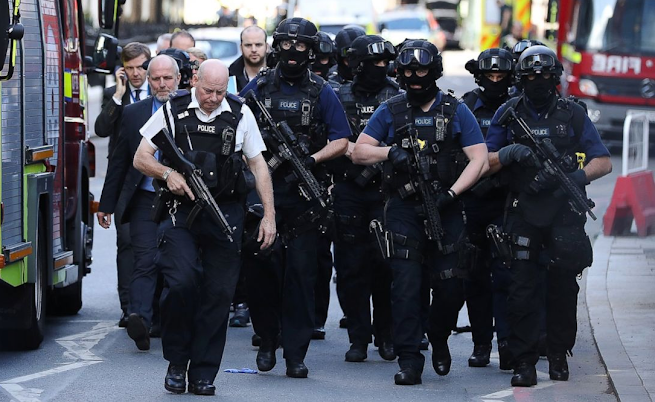 Editor's Note: Today, for the first time in a long time, I have the chance to introduce to you a new member of the “In Other Words” family! If you read It’s About TV, you’ll recognize David Hofstede as the author of the Comfort TV blog one of the best classic TV sites around. As you will discover, however, David has insights and opinions that run far beyond the world of TV, and he will make for a valuable addition to the team. It’s my pleasure to welcome him to the site, and to present him to you for your consideration.

Over the past few years there have been several prominent news stories about police officers shooting African-American citizens – many of whom were unarmed at the time.

Varied opinions have emerged as a response: some see this as an epidemic of irresponsible authority, and a reminder of the racism they see inherent in our culture. Others find an attempt to conflate isolated incidents into a national trend, and point to federal and state crime statistics that suggest no such pattern exists.

But here’s one reaction you won’t hear from either camp: “This is just something to which we all have to adjust. This is the price we must pay for having a police force.”

Can you imagine the outraged response if some sheriff or politician advanced that outlook? Unacceptable, their communities would say. This cannot stand. We have to do something, so these horrific acts don’t keep happening.

Okay. So why don’t we have the same attitude about Islamic terrorism?

Why have the deaths of a dozen or two African-Americans galvanized public demonstrations and the formation of an advocacy group purportedly designed to remind people that black lives matter, while the deaths of tens of thousands of people since 9/11 evoke only sadness, followed by a resigned shrug over how the world has changed?

Of course, efforts to curb terrorism are ongoing. Plots have been stopped. Precautions have been taken. But when the next Manchester or London Bridge happens, it will produce more heartbreak than anger, and more calls for calm than decisive action.

As David French opined in the National Review, we have become comfortable with terrorism, and those of us that are not are being told by our leaders that we should.

This is the “new normal,” we are told. But it doesn’t have to be.

We monitor terrorist cells and recruitment networks when we could be dissembling them. We put known meeting places under surveillance instead of under a wrecking ball. We “contain” (to use the previous president’s word) the threat of ISIS when we could be destroying the caliphate once and for all. We make relativistic arguments (hey, some Presbyterians are bad apples too!) to avoid being labeled a bigot, instead of clearly identifying the one and only specific credo that perpetuates and inspires mass carnage.

Yes, we now have a president who has clearly identified the threat, sometimes inelegantly to be sure. But even if he expressed himself with the eloquence of Daniel Webster on this topic, the response would likely be just as hostile.

Why is that? I don’t think it’s just anti-Trump sentiment, because for all of the tough talk Republicans muster in election years, the reluctance to mount a more aggressive response is largely bi-partisan: No boots on the ground in the Middle East. No travel restrictions from countries where extremism flourishes. No profiling.

If we do these things – if we even think about them, we are told, the terrorists win. They have won because we have compromised something in ourselves that makes us “better” than they are. But what is this aspiration that is so important it is worth preserving in the face of such barbarism? At some point, it must be weighed against the ever-increasing scores of innocent people around the world whose lives are violently ended by terrorism. Is there a number beyond the thousands already lost when, once reached, that scale no longer balances?

The alternative is to accept the world as it is now, with this prevailing threat that could strike anywhere at any time. Acceptance acknowledges that there will be more attacks. More airports and concert halls and parade routes turned into crime scenes. More dead children.

Don’t the terrorists win then too? If they win either way, what is the rationale against more definitive action?

Yes, there will be consequences. Some will be unexpected and some will be ugly. But it’s long past time we started asking whether those consequences are worse than 8 year-old girls dying at an Ariana Grande concert.
Email ThisBlogThis!Share to TwitterShare to FacebookShare to Pinterest
Labels: Politics, Terrorism